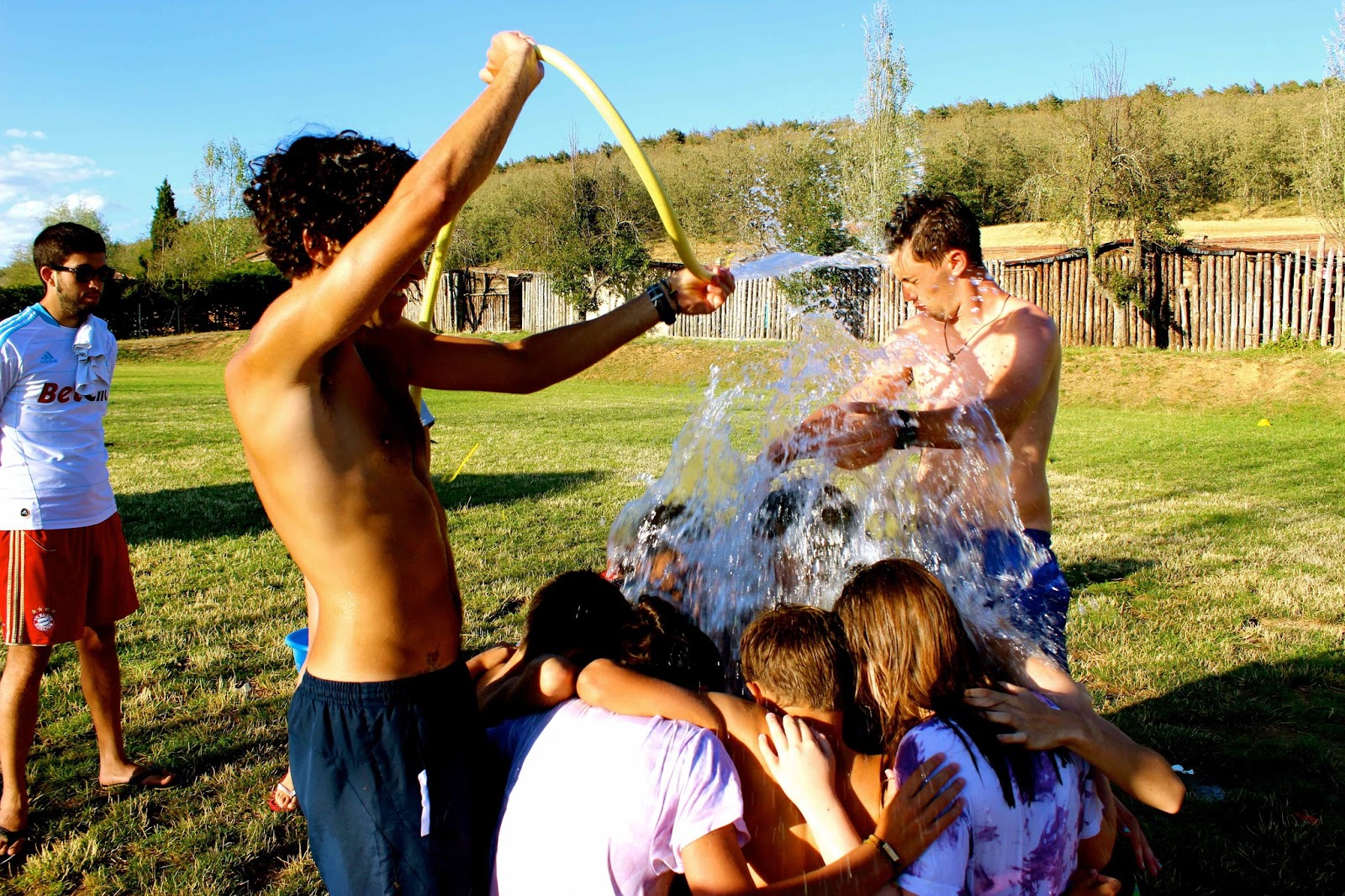 ---------------------------------------------------------
Grupo 1
Hello, yesterday we had breakfast and then we did archery with Pablin at the other side of the lake. After that we went to personal defense with Ruben in the football pitch.
At the mightday, we ate rice salad and meat with fries. After that, we called to our parents and we brushed our teeht
At three, we made mobile  with Charlie and with evagum. Also, we made a bracelet with Isa's help.
At five, we played the tournaments of footlball and volleyball and we went to te swimmingpool. Later, in groups, we are played with bidi/qr codes with Pablin.
Then, at night, we had dinner soap and spanish omelette. After, at midnight, we played to the Scared Nigth.In this game, the monitors dressed up with terrorific dresses for scared us. When we finished the night game, we went to bed

Grupo 2
Yesterday we woke at 9.00 a.m as always. At first we did morning activities which are great.  We played hockey and then we made an advertisement. Later, at 12.30 a.m we dance with music in aquagym with Pablo y Felix.
In the afternoon we did cocktails without alcohol and it was delicious. Afterwards we went to the forest to prepared the night that it was special because we did a vivac, we mean, sleeping into the forest without tends. The day was great and we had a good time.
After dinner we went to the forest again and we played games all together however we were scared since we knew an history about a boy who was disappeared and he is extremely dangerous.
In conclusion we love sleeping outside because we have new experiences like survivors. We hope we can repeat next year with all the mates.
INTERVIEW PALOMA BLANCO
1.- WHAT’S YOUR NAME?
My name is Paloma Blanco
2.- HOW OLD ARE YOU?
I’m 21 years old.
3.- WHY DO YOU COME TO SALDAÑA?
I´ve been coming to Saldaña since I was a child because I have fun and I like to be with children
4.- WHAT’S YOUR FAVOURITE ACTIVITY?
My favourite activity is Furor because it´s very funny and I laugh a lot. I love this camp and I came 3 years when I was a child and 5 years as monitor.
5.- WHAT ARE YOU STUDYING AT THE UNIVERSITY?
I´m studying medicin and I love it.
6.- Have you got a boyfriend?
No, I don´t have any boyfriend now. I´m a single now.
7.- TELL US SOMETHING ABOUT YOU
I´m not sporty and my hobbies are listening to music, go out with my friends and I doesn´t like running however I love this camp and I´ll continue coming here.
Grupo 3
Interview to Pablín:
1.- How old are you?
· I´m 21 years old
2.- Why did you turn into the camp?
· I turned into because when I was young I had fun and now I want children to have fun too.
3.- Which camp is the best; Saldaña or Santibañez?
· Santibañez is a feeling but Saldaña is our new home
4.- Which thing do you like most of being in Saldaña?
· The best thing is to see how children have fun
5.- Which year was the best?
· Thy all have been great but they are different
6.- Which activity do you like most?
· The best activity is “Furor” (the old version) or “La búsqueda del Tesoro”
7.- What would you fix on this camp?
· I would like them to put some shelves on the bedroom
8.- What are you studing?
· I´m studing ambiental sciences
9.- What age did you start being monitor?
· I started being monitor with 15 or 16 years old
10.- What makes you return each year?
· To feel like a little boy again and to have a break
The best thing in the camp:
On Saturday´s night, we played the game called “El Druida”. It consisted on finding different ingredients to make a mixtrure. If you are the first group who finds all the ingredients, you can choose which group drinks the mixture.
The monitors were hidding with the ingredients inside the campside and around it. The monitors hidden were ten and some of the ingredients that they had were tomatoe, ketchup, etc.
We found very fast some of the monitors, but after the sixth, we spent a lot of time to find the next one. When we had eight ingredients, we heard the bell that indicated that another group was the winner.
All the groups met in the romaine forum and the winner, group two, decided that our group had to drink the mixture, made by Pablin.
The mixture was horrible, but after it, they gave us chocolate.

Interview to Huerta y Pai
1.- How old are you?
· Huerta- 22
· Pai- 18
2.- What is your definition about Troski?
· H.- Trosky is the spirit of the camp
· P.- Trosky is the meal of the druida
3.- How many years are you coming to the camp
· H- 4 as a child, 5 as monitor
· P.- 3 as monitor
4.- Complete the sentence; “People in Saldaña like…”
· H- Cakering
· P- Move the ass
5.- Have you got girlfriend/boyfriend? Who?
· H- Yes, a girl from Oviedo
· P- No
6.- What is your favourite song in the camp
· H- Mother-duck
· P- The songs in the meals
7.- If you were an animal, what would you be? Why?
· H- The cat of a rich women, because I like to suit hats and clothes.
· P- A dog, because everyone likes it.
8.- What is your favourite game in the camp?
· H- Furor.
· P- Druida.
Family day:
Yesterday the Wandering Camp wake us up at 9:00 am singing and punching our rooms.
In the morning we practiced some songs beacuse it was parent’s day and we were going to sing in the mass. We also learnt the new Saldaña Anthem.
After that our parents come to see the summer camp and we had the mass. Then we had a great meal. We ate paella, blood sausages, red sausages, chorizo and bacon. To dessert there was ice-cream. Later, it was very cold, so we went to the pool.
In the evening we had a gymkhana of questions. We did it well. We did some quests to get a bunch of questions because the group who had more would be the winner.
For the dinner there was eggs, fruit and “troski” which was a mix of vegetables. In the night we played the “druida”, a game where we had to find some monitors, who were hidden all over the camp. We didn’t win but we neither had toe at the “troski”.
It was a different day.
Grupo 5
Yesterday in the morning after breakfast we made nice creams with fruits. Then we went by bike to Saldaña. The village is small but we liked  it a lot. When we arrived we had a break so we went to the swimming pool. Later we had lunch and we had another break.
After that, we prepared a game called "Furor". The girls prepared songs in a place and the boys in an other one. At six o'clock we ate the ice creams we made in the morning. Later the eldest boys and girls of the camp arrived and we finished preparing the game. At half past eight, we had a shower and we had dinner. After that we played the game and the girls won.
Interview to Alfonso:
1.- How old are you?
· I´m 18 years old
2.- What is your favorite food in the camp?
· My favourite food is macaroni.
3.- What´s your favourite game?
· Whithout doubts, Terror Night.
4.- Have you ever had girlfriend in this camp?
· Not here.
5.- Do you like the group you have on your first year as monitor?
· Yes, I think it´s a good group but a little disobedient.
6.- When you were a child, did you come to the camp anytime?
· Yes, I came for six times.
7.- What are you studying?
· I´m applying entering as a militar.
8.- Are you religious?
· Yes, a lot.
Grupo 6

At 09:00 o’clock in the morning we woke up. At 09:30 we had breakfast at 09:30 and after eating we brushed our teeth. Later, we did a DJ training activity and we learnt how to DJ. When we finished our DJ lessons, we made a sketch called “Grand Prix”. It was very nice because we did many funny exercises in the adventure park to record it. You will see it on the website!! The funniest activity of the day was “aquagym”. Pablo and Felix, our sport monitors, were our gym teachers and they did it so nice that he had a really good time.
Our first activity on the afternoon, consisted on going to the adventure park. Some members of the group were doing archery while others were fishing in the lake. When all members finished their own activities we jumped from a ski line. We had really nice photos on there!!
Later on, we had a break and ate a sandwich. After eating a little bit, we started “The water games”. They were amazing because we could refresh ourselves on a really hot day. After that, we had a shower and we had dinner. The menu consisted on: salad, sausages and potatoes.
At 22:45 when we finished our dinner and brushed our teeth, we started the night game, “La caza del zorro”. On that game, we ran a lot in order to catch the fox. It was exhausting but amusing at the same time.
INTERVIEW
1.- WHAT’S YOUR NAME?
· Juan Miyares Ajuria
2.- HOW OLD ARE YOU?
· I am 18 years old
3.- WHY DID YOU COME HERE?
· Because I came until I was child and I enjoyed a lot and I wanted to continue coming.
4.- WHAT DO YOU PREFER THE MOST ABOUT THE SUMMER CAMP?
· I like all the activities we do. I hate that in the morning is too hot to do some activites
5.- WHAT IS YOUR FAVOURITE ACTIVITY?
· Night games because they are the funniest ones
6.- WHAT DO YOU WANT TO STUDY AT UNIVERSITY?
· I want to study Civil engineering
7.- WHO IS THE MOST BEAUTIFULL MONITOR FOR YOU?
· I think the most beautiful monitor is Gaelle
8.- WOULD YOU LIKE TO COME TO THE CAMP AGAIN? WHY?
· Yes, of course. Because I have my holidays here and I enjoy it
9.- WHAT’S YOUR FAVOURITE BAND?
· I don’t mind. I like pop music and I also like all singer of music
10.- TELL US SOMETHING INTERESTING ABOUT YOU:
· I play “paddle”. I live in Gijón. I have a twin. I will study Civil Engineering and I like pop music. I love this camp because it’s funny